PSD2: Scoping out the impacts of the RTS

The PSD2 regulatory technical standards for strong customer authentication (SCA) and secure communication (SC) are proving difficult to finalize. Circulated in draft in 2016 for consultation, the EBA published its final draft in February 2017, followed by amendments requested by the European Commission, subsequently rejected by the EBA in June 2017.

The key sticking point is the use of screen scraping. Although PSD2 is technology-neutral, the EBA banned screen scraping in its final draft, whereas the EC wants to allow it (on a contingency basis). 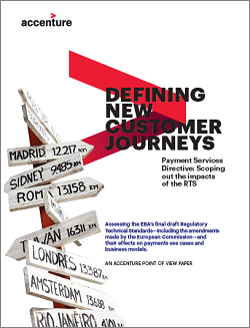 As it stands, agreement on the final text for the RTS between the EBA, EC and European Parliament may extend into August or September 2017, and with RTS coming into effect 18 months later, now Q1 2019 is the earliest.

PSD2 itself comes into force on 13 January 2018, and while there has always been a well-flagged gap from this date to when the RTS for SCA/SC come into force, the confusion over finalizing the RTS has led some PSPs to question if PSD2 itself will be delayed.

However, PSD2 is still slated to become law across the EU in January 2018, and PSPs have to be compliant with it by then. In the EC’s amendments to the draft RTS, their accompanying explanatory notes state that the RTS and security aspects of PSD2 articles 65 (confirmation of funds), 66 (access for payment initiation), and 67 (access for account information) are applicable from the same date as the RTS, which may have led some to believe the EC wants these key articles on account access to be delayed.

However, the EBA’s rejection of the EC amendments notwithstanding, it is only the RTS and security aspects of these PSD2 articles that the EC wants to apply from 2019, not the whole of each article—the rest of the provisions in these articles would still be mandatory from 13 January 2018.

In fact, the reality is that the final draft of the RTS is not law until the EC, EBA and EP (parliament) are in agreement, so as it stands now, all provisions in all PSD2 articles are applicable from January 2018.

Banks and other PSPs therefore need to be PSD2-compliant from 13 January 2018, with the following implications:

Banks/PSPs may have bilateral agreements with TPPs after January 2018, but they must also allow access to TPPs without a contract as well.

If a bank is not ready with APIs by January 2018, it’s OK—provided they allow screen scraping. But they risk being excluded from TPP services that only use APIs, giving an advantage to competitors who do provide APIs.

However, PSD2 compliance is independent of these challenges, which do not impact the need to be compliant in January 2018.

To request a copy of our detailed report on the impact of PSD2 RTS, please contact Lakshmi Kv or Jeremy Light.

Treasury APIs | How market leaders are paving the way

Treasury APIs | A win-win for banks and corporates post-COVID

A how-to guide for monetizing Open Banking and CDR data