How will this framework differ from the UK and others?

Countries across the world are gradually following in the footsteps of Open Banking in the UK and PSD2 in the EU, given the vast future potential offered by these schemes. In Australia, the federal government has agreed to implement the recommendations made by the Open Banking Review team chaired by Scott Farrell, for the regulatory framework under which an Open Banking regime would operate. And initially, the four major banks in Australia have been mandated to make banking data available to TPPs (third-party providers) by June 2019.

It is designed to give customers more control over their information, leading to more choice in their banking and more convenience in managing their money—thus resulting in more confidence in the use and value of an asset mostly undiscovered by customers: their data.

One could consider the UK’s Open Banking technical specification as an example approach. Specific API design principles—such as redirect-based authorization and authentication flow—have been taken as the starting point for setting data transfer and authentication standards in Australia, though these would be adopted only with appropriate considerations.

Contrary to PSD2 and UK Open Banking, Open Banking in Australia is part of the Consumer Data Right. The CDR will give consumers greater power to control their data—and banking is the first sector in which it will be applied. So, the focus of all the developments is to form a single, broader framework which is interoperable across sectors apart from banking. The Farrell Review has given special consideration to how Open Banking is going to work with existing laws and systems such as the Privacy Act, Competition and Consumer Act 2010, and Anti-Money Laundering law to avoid any uncertainty and ambiguity. 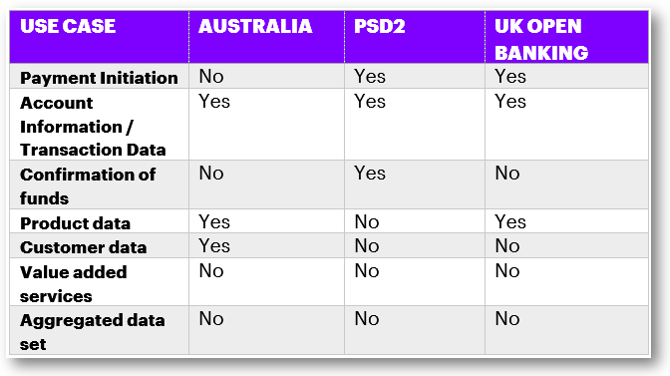 Australia has taken a very structured approach in planning for Open Banking to work with existing regulations and incorporating lessons learned. It has also addressed considerations such as customer education, dispute resolution, the ACCC breach reporting obligation and post-implementation assessment to make Open Banking more effective in Australia.

Next Post - How well does your bank’s pricing strategy fit the digital economy?

Suggested Post - How well does your bank’s pricing strategy fit the digital economy?